December, 2016 update: House NA is now listed on Google Maps. It is located in the Koenji neighborhood of Tokyo, southwest of JR Koenji Station (map).

House NA, the intriguing 914 square-foot glass house designed by Sou Fujimoto Architects 藤本壮介建築設計事務所 has been documented generously in words and pictures; the visual record of this young structure is impressive. Surprisingly, disclosure of the house’s specific location is nearly non-existent. Having never backed down from an internet search challenge, I located the building’s exact address using two clues.

First, the house’s location was described by one writer:.

“located on a small side street in a very lively, “hip” part of the city. Full of eccentric, off-the-wall little shops, this neighbourhood’s intense social life is associated with a human-scale ambience made of low houses and mostly pedestrian and bicycle traffic.” Source: domusweb.it

The location is so well hidden that even a google search including the name of the neighborhood yields few results. (I found success with a Brazilian blog and a thread from a social networking site). The censorious absence of the project’s location is curious. Is there a rule or convention in architectural journalism prohibiting the disclosure of a house’s location?

(Suspiciously, Streetview images from the 20 meters of road fronting the property are not viewable on Google maps, while neighbors on both sides are available.) 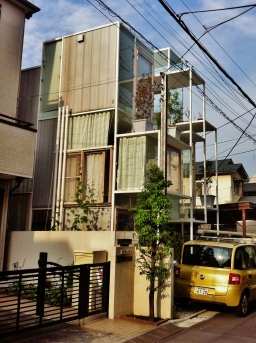 So where is this mystery property? In the age of instant Google searches, I feel somewhat protective of the house’s almost-secret location. I may tell you, but you’ll have to ask politely.