Two of my Japanese obsessions are a match made in urban planning heaven: 1) Japan’s vast passenger rail network, and 2) danchi 団地, the large housing complexes that became popular in post-WWII Japan. (I even started a separate blog: the tokyo files: danchi 東京団地萌え).

Danchi are characterized by uniform rows of unremarkable building that are sequentially numbered so that residents and visitors don’t get lost. Below, a still from Scattered Clouds (1967) offers a typical danchi scene; also, a map of the old Asagaya danchi 阿佐ヶ谷住宅 is also quite common. 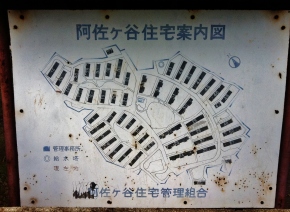 Danchi can be seen as ugly due to their uniformity and utilitarian design; but these elements also provide their beauty and strength. Danchi represent an era of unprecedented economic growth that followed on the heals of the deprivation that immediately followed WWII. Showa nostalgia 昭和ノスタルジー, the term that describes a longing for that period, is closely tied to danchi nostalgia.

Higashi-no-danchi station ひがしのだんち (MAP), in the northerly Aomori Prefecture, was part of the Towada Kankō Electric Railway Line 十和田観光電鉄線, which ceased operations in 2012. In its final years, I gather this train was  known as the Towada Tourist Railway とわだかんこうでんてつ.

Kogyo-danchi Station こうぎょうだんち, in southern Shikoku, is part of the Tosa Kuroshio Railway Sukumo Line 土佐くろしお鉄道宿毛線. It is an unmanned “ghost station” 無人駅. Rather than a traditional housing complex danchi, the word kōgyōdanchi 工業団地 means “industrial park” or “industrial estate”. In this case, it’s Sukumo Industrial 宿毛工業団地, a site that dates back to 1975. (Source)

The industrial park is located in the middle of lovely farmland, with a sweeping arched viaduct immediately to the west.

This photo is from the top of Mukogawa danchi bldg 19, looking northwest towards Koshien Stadium 阪神甲子園球場 (the dark sliver). The cluster of red brick buildings and tower is Mukogawagakuin: Mukogawa Women’s University Junior and Senior High School 武庫川学院武庫川女子大学附属中学校・高等学校 (map / (source)

A pedestrian walkway connects the danchi’s two halves (source, map). See more info about this danchi at the UR website.

Matsubara-danchi Station まつばらだんち (MAP), in Soka, Saitama 埼玉県草加市, is a 40-minute train ride north of Tokyo Station. The station is named after Soka-Matsubaradanchi 草加松原団地（そうかまつばらだんち）, a mammoth housing complex completed in 1964. The complex is undergoing a multi-year project to replace the old buildings with newer apartments. The following blog post, titled “Matsubaradanchi Showa scenery”,  has some nice pictures from 2012.

When first built, the buildings were a stark contrast to the surrounding farmland. (source) 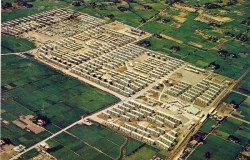 Soka-Matsubaradanchi, facing south, from Google Earth. The dirt baseball field in the middle/left of the picture is located here (map), in Section D of the danchi.

The photo below is of the west edge of the danchi, facing north. Building D-61 is located here:  map. (source)

The danchi originally had 4 sections: A, B, C. D. Section A, closest to the train station, has been demolished and replaced with newer buildings, Comfort Matsubara UR都市機構コンフォール松原, administered by UR, Japan’s semipublic housing agency. 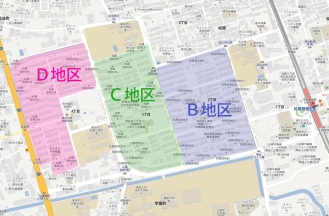 Uji-Danchi-Mae Station うじだんちまえていりゅうじょう (MAP) is served by the Ino Line 伊野線 (Ino-sen), a tram which, combined with the Sanbashi and Gomen lines, covers 25 kilometers. According to japanvisitor.com, the Kochi streetcar is the longest tram network in Japan after Hiroshima. In contrast, Kamakura/Enoshima’s famous Enoden 江ノ島電鉄 covers only 10 kilometers. 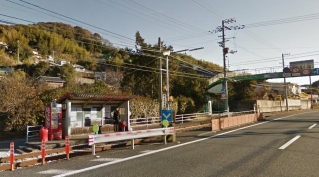 Ushibuchi Danchi-Mae station うしぶちだんちまえ (MAP) is home of Ehime Prefectural Ushibuchi danchi 愛媛県営牛渕団地, is 30 minutes southeast of the city of Matsuyama, in Shikoku. This complex, of approximately 20 buildings, is unusual for the way in which the buildings are numbered. Most danchi I’ve seen are numbered with Arabic numerals: 1, 2, 3, etc. However, some of the buildings of Ushibuchi danchi are numbered: No 1, No 2, No 3, etc. This is the type of thing that only a danchi-nerd 団地“萌え will find interesting.

Near the coast of Iwate Prefecture, Yamaguchi Danchi Station やまぐちだんち (MAP) comprises 18 buildings spread out along both sides of the Sanriku Railway Kita-Rias Line 三陸鉄道北リアス線. You can watch the train pulling into this modest station at the 3:30 mark of the following video: link. 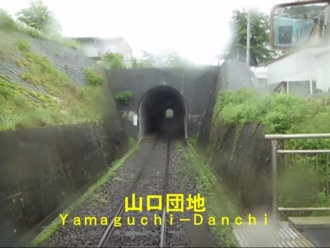 Have Wikipedia and I missed any?

Leave a Reply to Google Streetview, after dark, in Japan | The Tokyo Files media Cancel reply 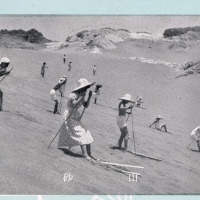 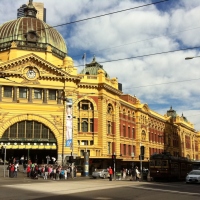