The “Oh, Mistake” incident, and crime in apres-guerre Japan 「オー・ミステーク」事件と「アプレゲール犯罪」

A friend sent me a link to a great article about Ivy League fashion in Japan in the 1950s: “The Climb of Ivy: The styles of the American Ivy League transform the fashions of 1960s Japan”, by W. David Marx. Among various interesting topics, the most sensationally entertaining bit is the “Oh, Mistake Incident” 「オー・ミステーク」事件 of 1950. Marx writes:

“Hiroyuki Yamagiwa, a nineteen-year-old chauffeur at Nihon University, broke into a coworker’s car at knifepoint, slashed the driver, and drove off with 1.9 million yen in cash…The minor crime made headlines after Yamagiwa screamed out in pidgin English “Oh, mistake!” upon being apprehended.”

There’s also a nice summary in Bodies of Memory: Narratives of War in Postwar Japanese Culture, 1945-1970: 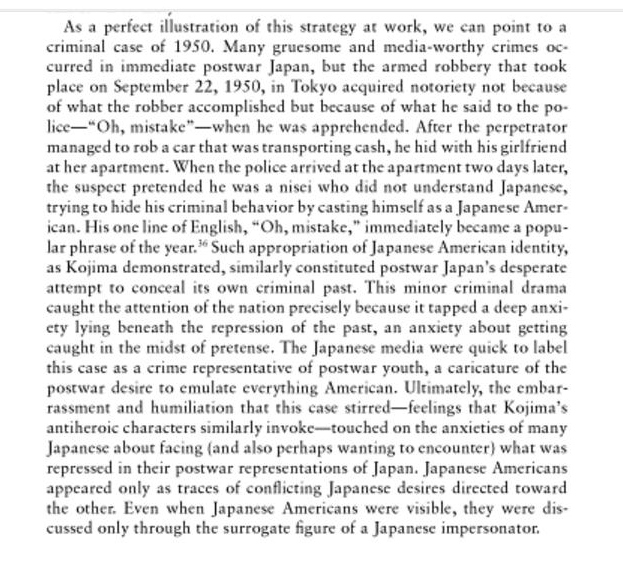 I found a few Japanese blogs that describe the incident, but they don’t offer much more than the English sources. They do, of course, include the man’s name in Japanese: Hiroyuki Yamagiwa 山際啓之（やまぎわひろゆき）, and provide some amusing photos. Yamagiwa, you see, was a fashion fanatic. 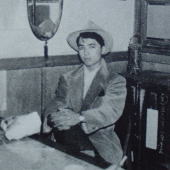 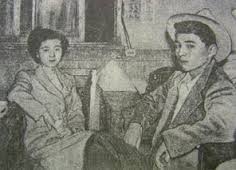 I also picked up some more details about the post-war era. The first is the French term  アプレゲール (après-guerre, or “post-war”), which was applied to Japan after WWII. The term 「アプレゲール犯罪」 (apres-guerre crime) reflected the sentiment that post-war crimes were a result of weakening social fabric. Japanese Wikipedia writes:

“The term “Après” was popular in Japan after the second World War. Values and authority of the pre-war era was completely disintegrated, and young people lack morality; due to the crime occurring frequently, the crime they was called “apres-guerre crime“. In addition, the groups of Gurentai 愚連隊  (gang of young toughs)  made security worse. Such dark side is also included, and came to be called “Après'”.

The following blog lists representative headlines of the era, including the Teigin Shiinamachi branch incident 帝銀椎名町支店事件, in which a man mass-poisoned the employees of a bank (source): 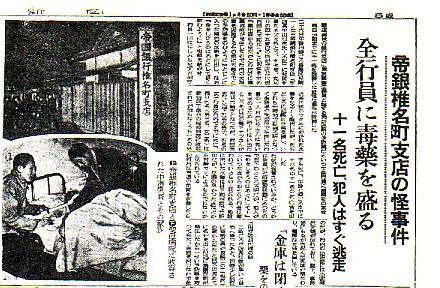 These blogs also list a shocking incident I’d never heard of, the 小倉黒人米兵集団脱走事件 (Kokura black American soldier group breakout), in July 1950. This incident is mentioned in The American Occupation of Japan and Okinawa: Literature and Memory, and was described in chilling detail by Seichō Matsumoto 松本清張 in his fictionalized account, “Painting on a Black Canvas” 『黒地の絵』 (Kuroji no e). (See post: Occupied Japan: The Kokura incident, “committing excesses”, and murder on the 4th of July 「黒地の絵」)

In the first part the story, a platoon of black GIs sneak out of Camp Jono 城野補給基, in Kokura 小倉市 (now Kitakyushu 現北九州市). Later, a group of five GIs find themselves in the house of Japanese couple, thinking it is a bar. Eventually, the men tie up the husband and rape the wife. In part two of the story, the husband, thirsting for revenge, works in the “Corpse Treatment Section” of the camp so that he can find the dead body of the GI when it returns from Korea. See below for further description: 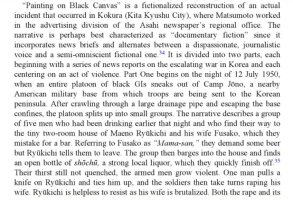 Seicho Matsumoto is the same author who popularized the notorious Aokigahara 青木ヶ原 (aka the “suicide forest”) in his 1960 novel, Kuroi Jukai (Black Sea of Trees) 『黒い樹海』（くろいじゅかい）. He also wrote Zero Focus (ゼロの焦点) Zero no Shōten (1959), which was adapted into a terrific film by the same name. 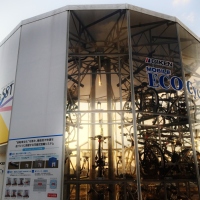 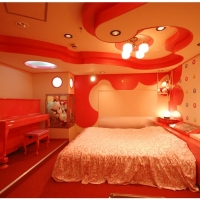 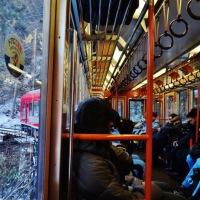 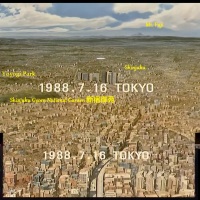 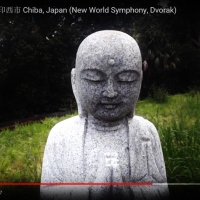 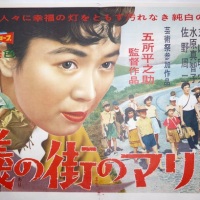 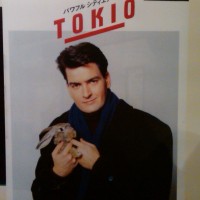