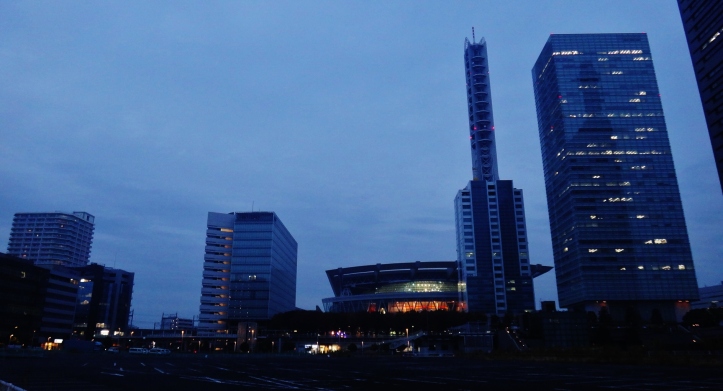 This is the Japan I had been expecting: mega-structures, bold urban design, a de-humanizing city of the future. Saitama Super Arena さいたまスーパーアリーナ and Saitama Shintoshin Station さいたま新都心駅 are not built for the human scale; yet between these concrete and steel monsters, hundreds of trees grow, arranged in a large grid, providing physical and spiritual shelter to the people walking underneath. This is the Keyaki Hiroba Plaza けやきひろばプラザ, or Saitama Sky Forest, although I’ve seen it given many names. (1)

I first read about the Sky Forest in architecture and design blogs, so naturally the language was florid, describing vertical potentialities and the naturalistic vernacular, or some such design-speak. My two visits to the Sky Forest both have been accidents, the first the result of an overzealous sanpo 散歩, and the second because of a beer festival my friends invited me to. 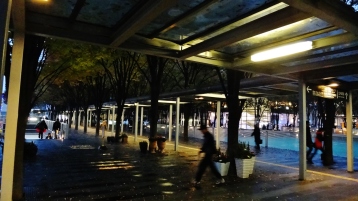 On my first visit, as dusk turned to night, the plaza was transformed by thousands of Christmas lights, an annual tradition that now seems more popular in Japan than in the West. At the Keyaki Hiroba Plaza, the lights are on display from November through mid-February, called “Blue Lights Symphony” in 2013, and “Dance with Twinkle Lights” in 2015. 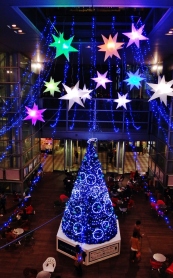 The Sky Plaza is located a few hundred yards from the west exit of Saitamashintoshin Station, which is a mere 22-minutes from Ueno Station on the JR Utsunomiya or JR Takasaki Lines. In this map, the Sky Forest is the area labeled “Keyaki Hiroba“..

Below the tree plaza are shops and restaurants, and a playful public space with trees, lights, and an undulating walking surface that complements the naturalistic feel of the trees overhead.

Those trees, by the way, are zelkova, a type of elm known in Japanese as keyaki, hence the name “Keyaki Hiroba” (zelkova square). This confused me because I saw keyaki spelled using the phonetic hiragana alphabet, where けやき is comprised merely of the sounds け (ke) や (ya) and き (ki). When I put “けやき” into google translate, though, instead of keyaki I kept seeing “zelkova” as the first English translation, a word I had never before seen or heard.

While I appreciated the plaza on my first visit, it wasn’t until the beer festival that I saw how important the trees were to the Sky Forest’s role as public space.

A late dusk scene from the Keyaki Hiroba plaza, aka Saitama Sky Forest. 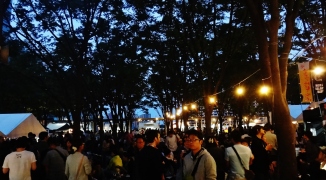 In the absence of trees, what a strange and sad sight it would be, thousands of people drinking beer while sitting on hard stone and concrete. But surrounded by trees, the feeling is one of being in a forest, albeit a crowded forest. The trees frame the experience and provide a sense of intimacy that would otherwise be impossible for such and large space. 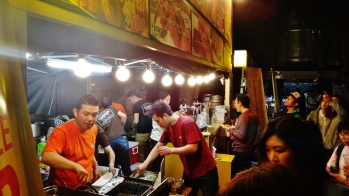 Walk a few steps north of the Sky Forest and you find yourself, incongruously, at the Saitama Super Arena さいたまスーパーアリーナ. When I was there, thousands of girls waited patiently for a concert by the J-POP artist Nishino Kana 西野 カナ. Hopefully they had more fun at the concert than waiting in line; they looked rather sullen, but maybe it’s because I was there. 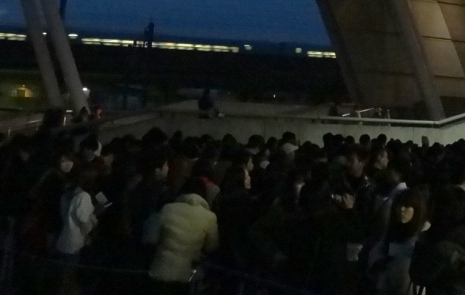 The tour is over, time to head back to Tokyo. We’re all the way in Saitama, 20 miles from central Tokyo, but we’ll be home in no time. Just don’t sleep too long on the train. 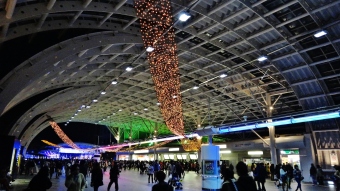