My wife learned the salty taste of tears at a young age when she and her best friend from kindergarten graduated to different schools the following year. For several months they maintained a steady correspondence requiring stationary in the form of themed letter sets レターセット. One letter set was emblazoned with the image of a beautiful young woman. Who is this? My wife asked. Her mother replied: Ōdorī Hepubān オードリー・ヘプバーン.

Audrey Hepburn’s appeal in Japan is well documented by Japan observers, so I won’t try to explain why she has been so popular. Let me simply share with you some of the various places where I’ve come across Audrey Hepburn. She pops up in so many places that I may eventually come to the conclusion that she is stalking all of us in Japan.

In 2012, when I first discovered Eri Chiemi, it was via a movie whose opening sequence reminded me of the early-dawn scene from Breakfast at Tiffany’s. However tenuous, that post provided my first shared context between Audrey Hepburn and Eri Chiemi. That context expanded when I learned that Eri Chiemi had starred as Eliza Doolittle in the 1963 Tokyo production of ‘My Fair Lady’  『マイ・フェア・レディ』,  and even auditioned against Hepburn for the film production of My Fair Lady (one of Hepburn’s more famous roles).

While auditioning, Hepburn and Chiemi posed for this photo from 1964 (source):

The idea of Eri Chiemi starring as an Englishwoman may be amusing, but so too is the idea of Hepburn playing a Japanese woman in Sayonara (1957); the role went to Miiko Taka 高美以子. Here’s an interesting note from IMDB:

“Hepburn was offered the role of a Japanese bride opposite Marlon Brando in Sayonara (1957) but turned it down. She later explained that she “couldn’t possibly play an Oriental. No one would believe me; they’d laugh. It’s a lovely script, however, I know what I can and can’t do. And if you did persuade me, you would regret it, because I would be terrible’“.

Further detail from TCM:
“they were “seriously thinking of [casting] Audrey Hepburn or Jennifer Jones.” In a Mar 1957 Var article Logan said that Hepburn read the script several times, but refused the role because she was “terrified of…acting and thinking like an Oriental.”
Does this look right?

(1) Same-sex attraction in an Ozu movie?

An unexpected exchange between Chikage Awashima 淡島千景 and Shuji Sano 佐野周二 in Yasujirō Ozu’s film Early Summer 麦秋 (1951).
(Upon further investigation, it seems that this was a translation error in the subtitles. Only the name ‘Hepburn’ is mentioned and she is described as an “American actress”. Furthermore, this film was made in 1951, and Audrey probably wouldn’t have been famous in Japan until after her role in “Roman Holiday” in 1953.  The alternative is that this is a reference to Katherine Hepburn; although Katherine isn’t traditionally associated with Japan, she starred (alongside Humphrey Bogart) in “The African Queen” in 1951; due to the American occupation it would not be unreasonable to presume that that film was released in  Japan, making Katherine Hepburn a recognizable name to film buffs. Many thanks to the commenter who brought this to my attention.) 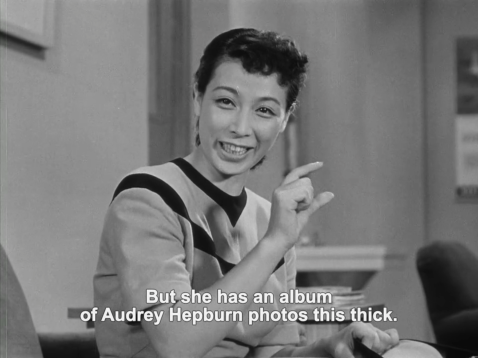 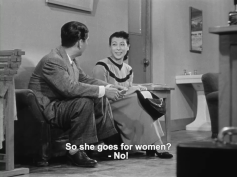 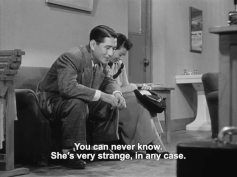 If you recall the image of Audrey Hepburn on my wife’s stationary….it was from the final scene of Roman Holiday ローマの休日 where Hepburn is dressed in full princess regalia. According to Layers of the Ethereal: A Cultural Investigation of Beauty, Girlhood, and Ballet in Japanese Shōjo Manga, Roman Holiday: “was particularly popular in Japan, being made into manga by Hideko Mizuno 水野英子 in 1963, but Takahashi’s charming Princess Anne (1959–60, story by Sugako Hashida) also seemed to have been influenced by the film.” A reprint of Mizuno’s Roman Holiday manga is available on Amazon. Here’s the cover and the “Mouth of Truth” scene from the manga (source). 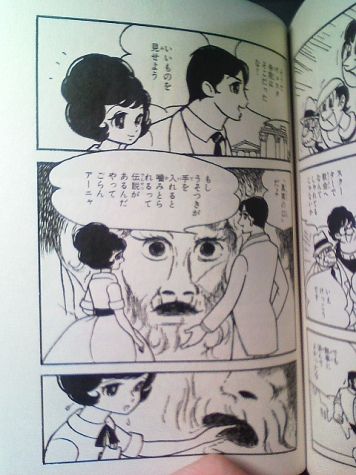 In the absurd comedy April Fools エイプリルフールズ (2015), an elderly couple, looking to add spice to their mundane lives, impersonates the Japanese Imperial Family while eating lunch at a local restaurant. When their ruse is discovered, they apologize for getting carried away, “like Audrey Hepburn in Roman Holiday.” 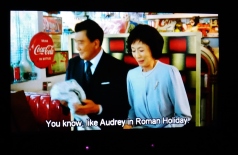 (4) It will be Breakfast at Tiffany Someday 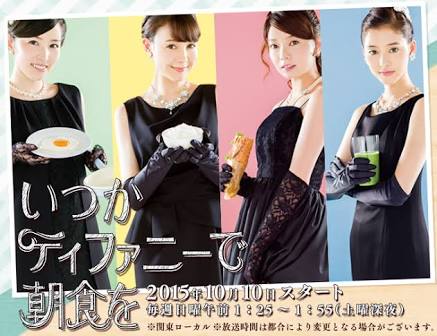 (5) Peeking from storefronts and windows 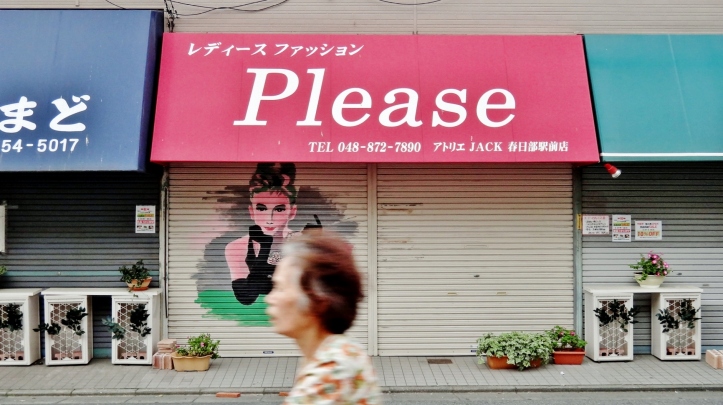 Hepburn graces the entrance of a storefront in a still from the excellent Netflix series, Hibana 火花:

A more somber Hepburn can be seen in the window of 花野苑, a flower shop in Oimachi (map). 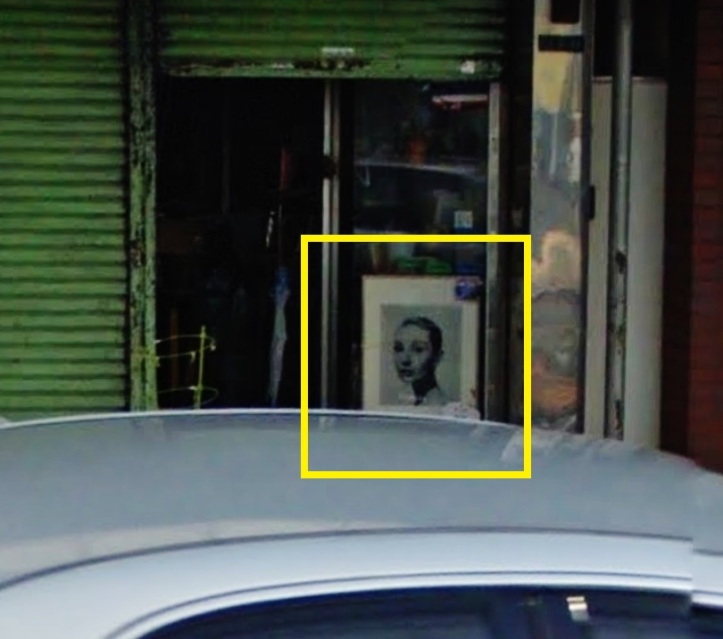 I’ve had this photo in my files for years. Who is this, and what’s her connection to Audrey Hepburn? 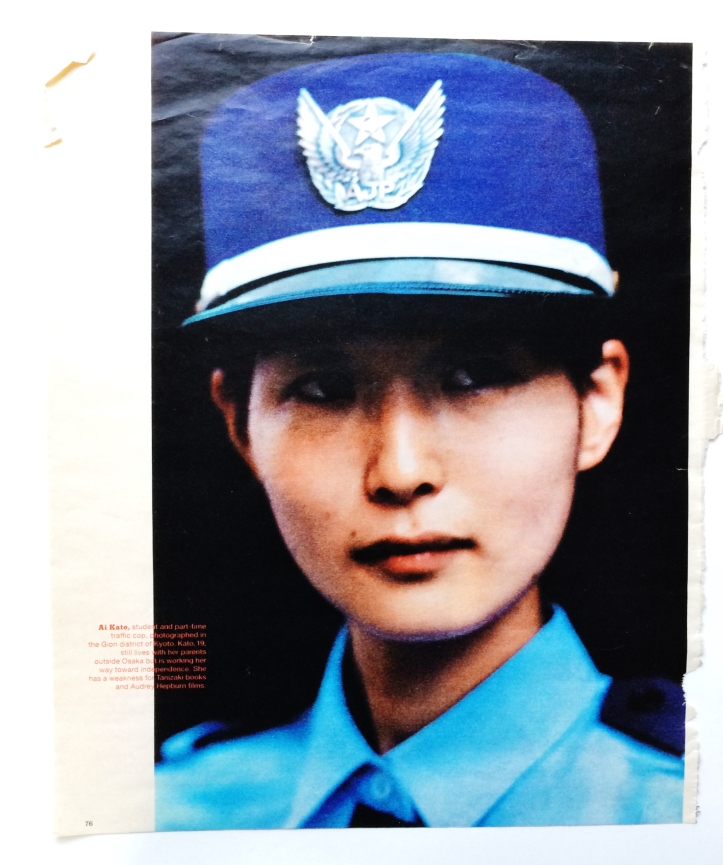 This is Ai Kato, a student and traffic cop who was profiled in a 2005 New York Times photo essay of Japan. (Style; Murmurings of a Geisha). The Times notes:

“Kato, 19, still lives with her parents outside Osaka but is working her way toward independence. She has a weakness for Tanizaki books and Audrey Hepburn films.” 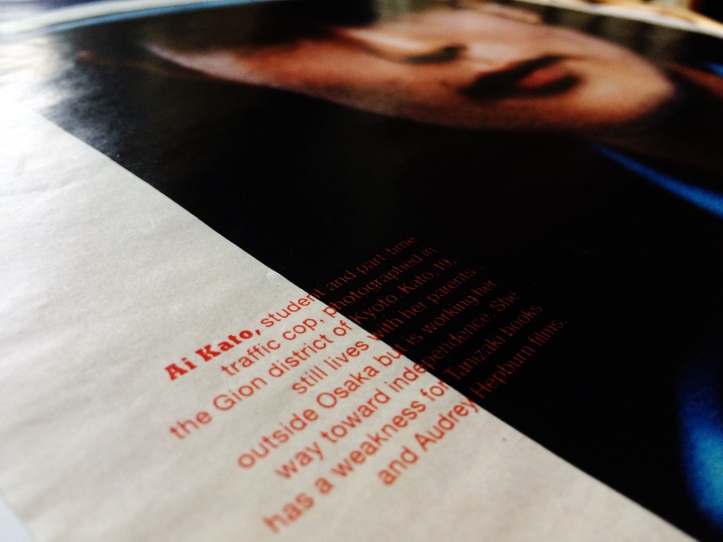 Without any effort I encounter Audrey on a shelf in an Ebisu coffee shop, and find two titles on the shelves of a Shiodome bookstore.

A 2017 Umeda Arts Theater production, and a 2016 all-female production by the timeless Takarazuka Review 宝塚歌劇団. 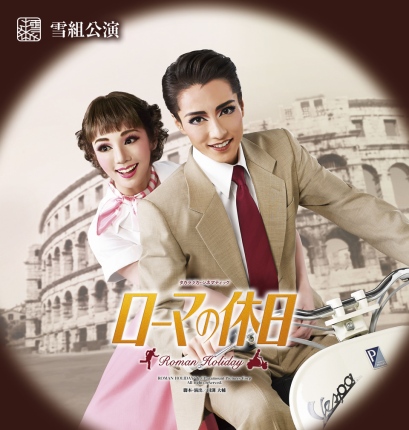 The small, hilly, and lovely town of Ōme 青梅市 is about 1.5 hours west of central Tokyo. Before you leave the station you are greeted by vintage movie posters, which you will also see throughout the town. Note, this seems to have come to an end: “End of an era in Ome, as credits roll for retro movie posters”, Asahi Shimbun, October 19, 2018 (broken link).

Kyu Sakamoto’s mega-hit 上を向いて歩こう (aka “Sukiyaki”) was on the American pop charts in 1963. In Los Angeles that year, Sakamoto, at the height of his overseas popularity, expressed interest in meeting Audrey Hepburn. She said no. As consolation, he went to Disneyland (Sayonara Amerika, Sayonara Nippon: A Geopolitical Prehistory of J-pop, page 249).

It’s fitting to end this post here, since Sakamoto’s life is so well known for its shock ending. To avoid leaving on a  sour note, let’s listen to Sakamoto’s famous song. I’m certain Sakamoto would have serenaded Hepburn with this had she granted him an audience.

“An overexposure that once prompted the following comment from my vacationing mother: “What’s the matter with these people? Don’t they know she’s [Audrey Hepburn] dead?” And has been dead for nearly a decade.”

“My wife was not the only one to think so. Guests from Japan crowded all the “Roman Holiday” highlights. And 70 percent of visitors to Hepburn’s grave in Switzerland come from Japan.”

“OK,” I now cut straight to the source of sources. “Hepburn herself, when asked why the Japanese loved her so, put it this way: ‘It’s curious. Maybe I just look Japanese.’ “

“Hers is a mournful beauty,” my wife has said. “In ‘Roman Holiday,’ Princess Ann has to surrender her love — her dream — for family duty. She does so reluctantly, yet with grace. We Japanese admire that. Especially in the early ’50s, what with the wreckage of the war and with everyone giving of themselves for the sake of the nation, we understood such sacrifice well.”

As chronicled in The Olympians, in the lead-up to the 1964 Tokyo Olympics, Dentsu published a book that was meant to provide a positive image of the Japanese. The “Faces of Tokyo” section of the book “intended to leave the foreign reader the impression that the Japanese, in 1964, are indeed savvy internationalists…Dentsu selected Reiko Kawasaki as the face of the young model, likely because she evokes a young Audrey Hepburn.” 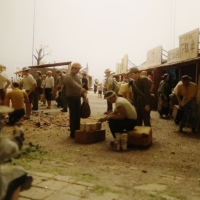